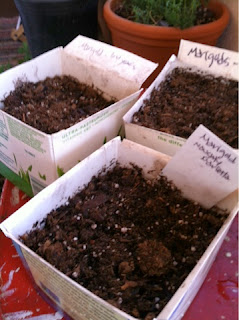 A happy day is made, when you begin the starts. 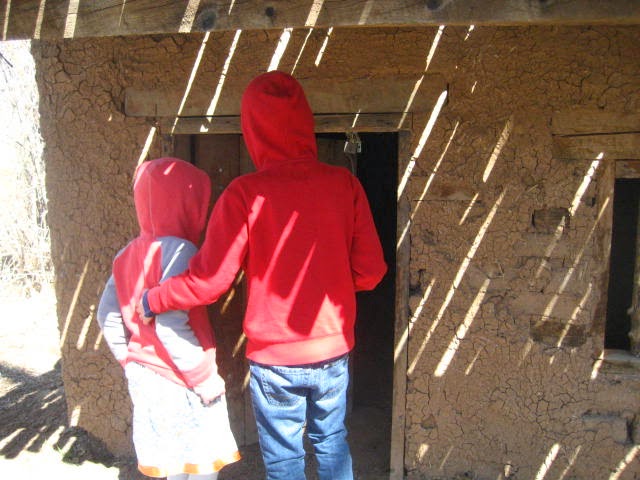 Some of our favorite Kansans came to visit us last week, nine of them in all. The visit meant two big dinners at our house (which was very fun), several walks around our valley, trips to favorite sites and even a birthday party for the now six-year old (a reason to bake a chocolate cake, and decorate it in sprinkles). 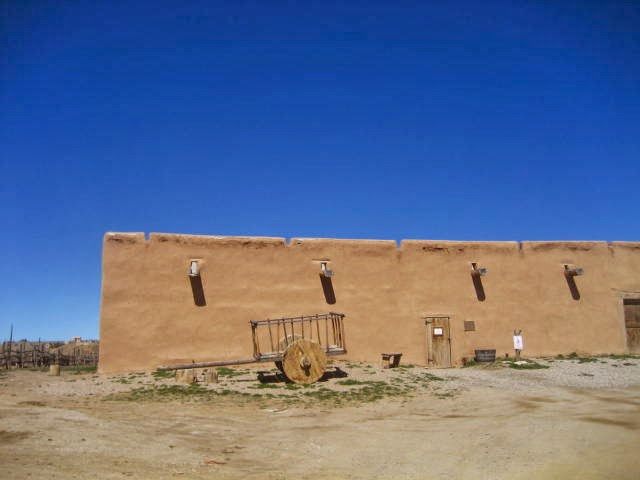 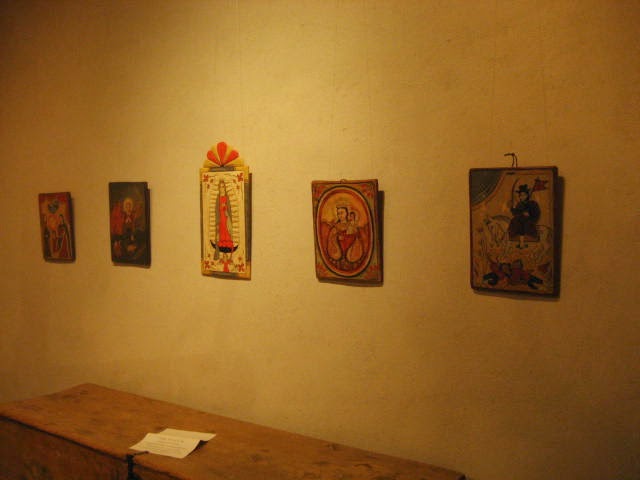 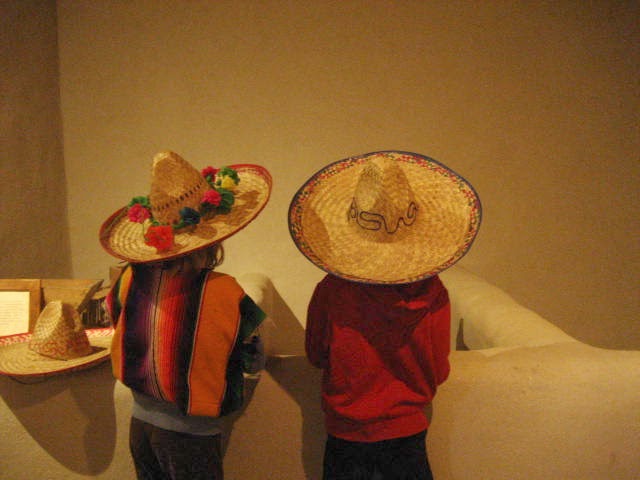 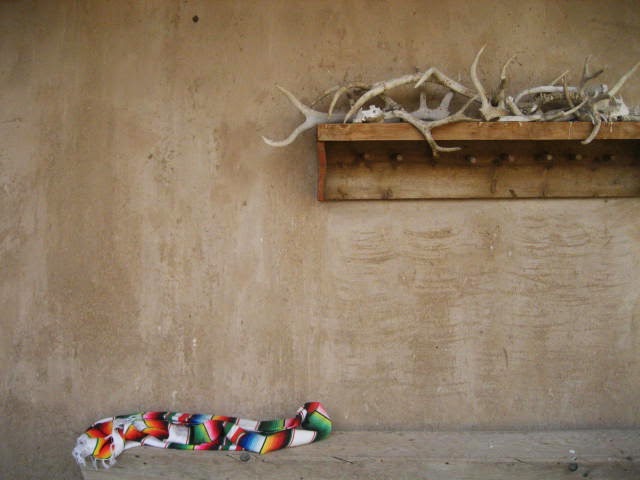 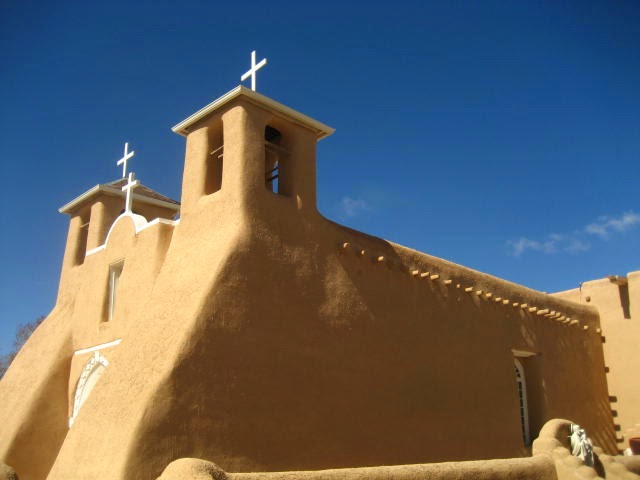 I still find it surreal, showing my people from "home" what is "home" now. It reminds me of just how much I don't live in Kansas anymore. But it also gives opportunity for me to visit new places, and re-visit favorites. I never tire of the silhouette of the San Francisco de Asis, or a walk through a museum or two...and this time I finally saw the Martinez Hacienda (a sort of living history museum) and we had a chance to walk the Little Arsenic trail at Wild Rivers (and we encountered a herd of llamas on the way down). 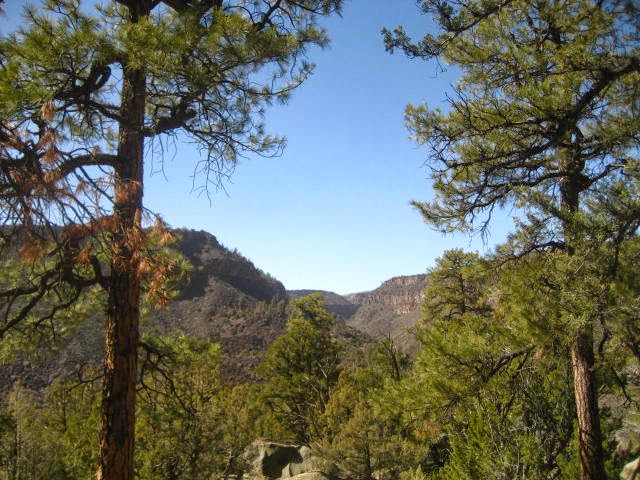 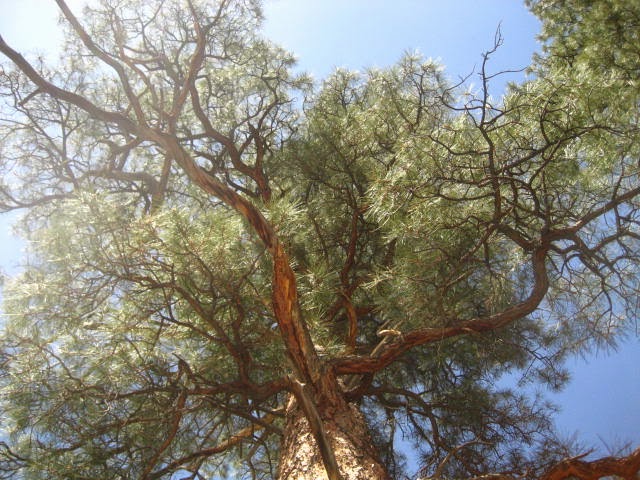 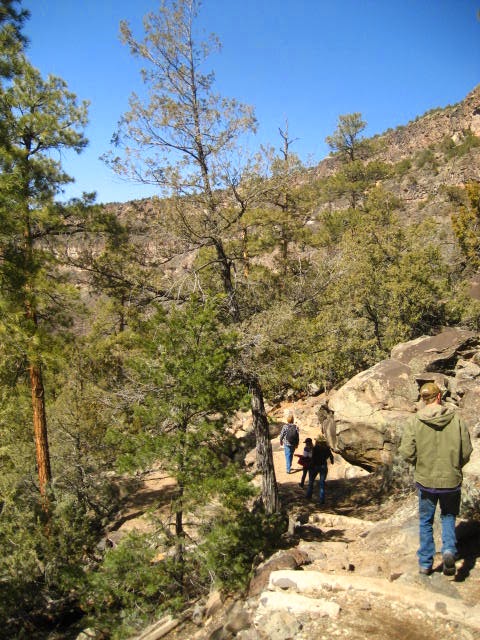 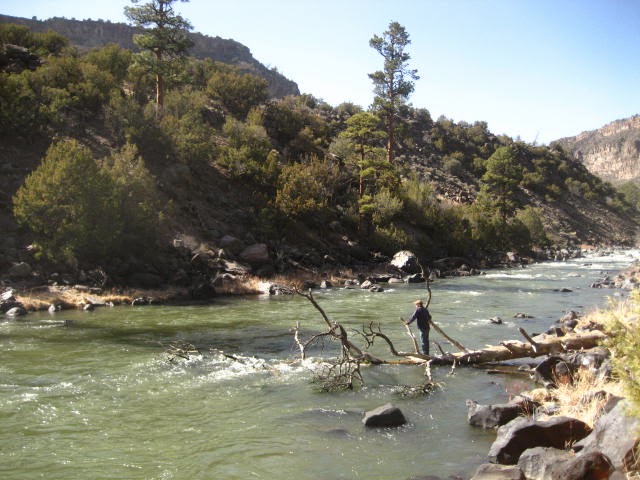 We are back to our day-to-day. A search for a new truck and a new job. And this weekend, plans to plant some greens in the cold frame. And maybe a long walk in the Spring weather. 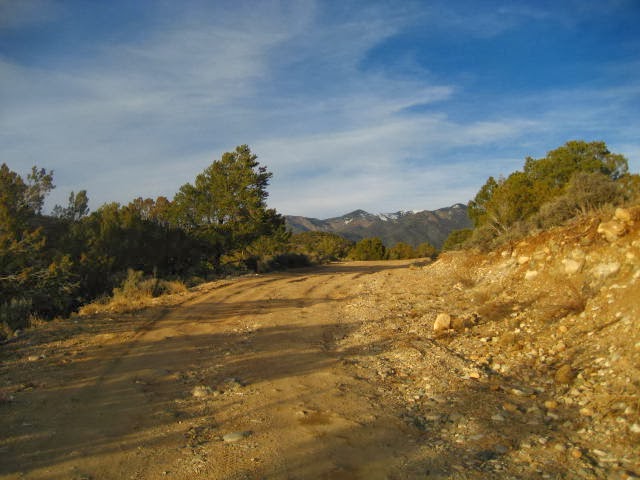 Yesterday evening D. suggested we take a walk, and enjoy the daylight-savings-change evening light. It has been a season or two since we took an evening walk. We saw several neighbors also walking, so we weren't the only ones inspired by the warm air & this new light. 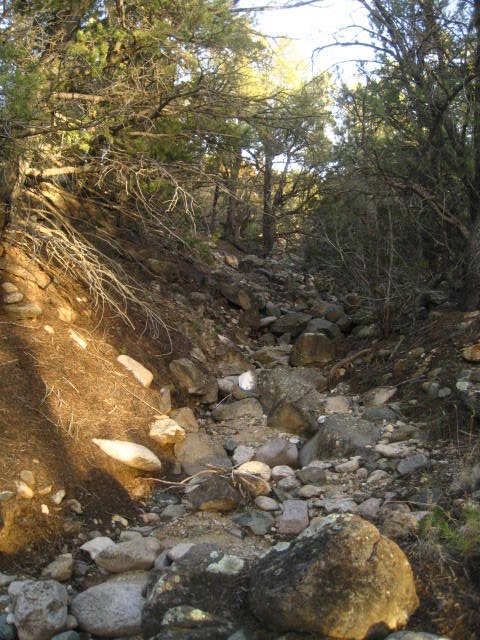 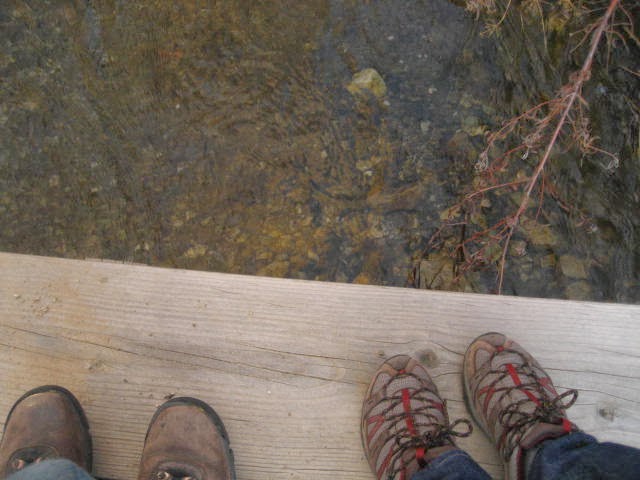 The acequia is running. Since the community doesn't officially "clean" the acequia until April, we don't really know why it is already running. We guess it is due to drought, and the need for everyone to water trees & pastures. (As the acequias are natural irrigation ditches, they have to be cleaned of winter debris each Spring, and everyone who has rights to the acequia must contribute to clean-up...it is a community project that predates the Spanish.) 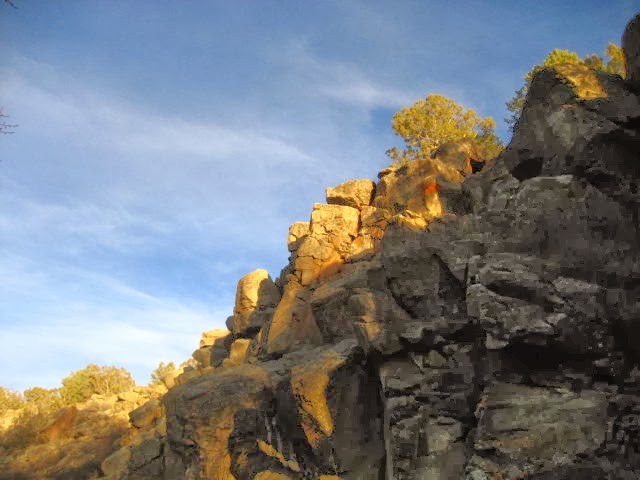 As we stood underneath the sunset-lit canyon, D., smiled and asked me if he's ever told me how amazing our neighborhood is. He of course has. Our luck at living here is reminded to us on every walk. But standing there, with the light glowing on rocks above us, the sound of the river rushing by, we were both pretty caught up in the romance of this land. 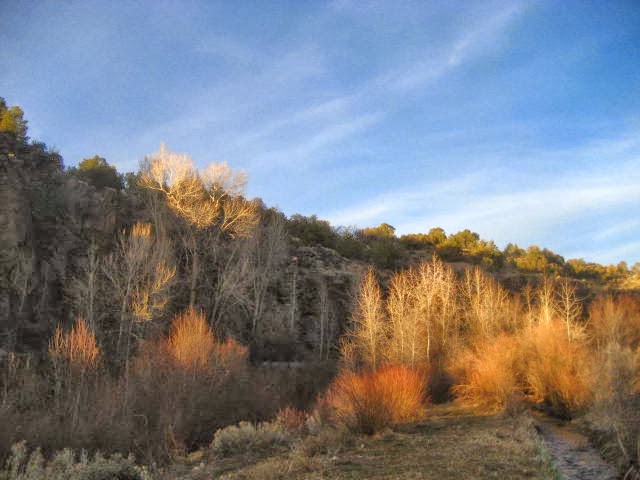 A number one reason for so many who have moved here, the light. The light is glowing, amber, & soft. It makes the bare, white Aspens glow, and the Red Willow shine. It even turns the boulders gold. 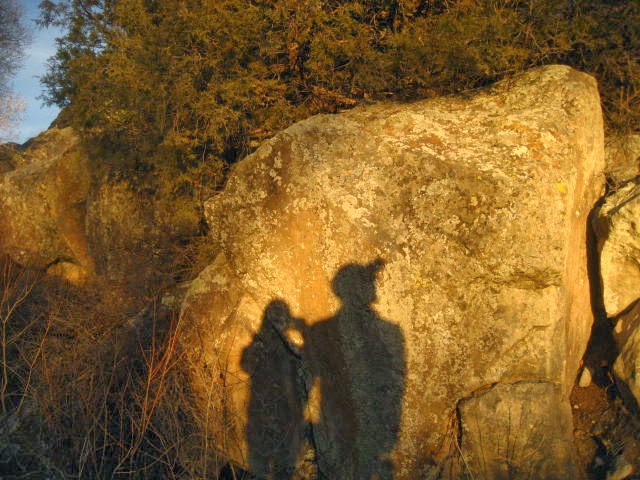 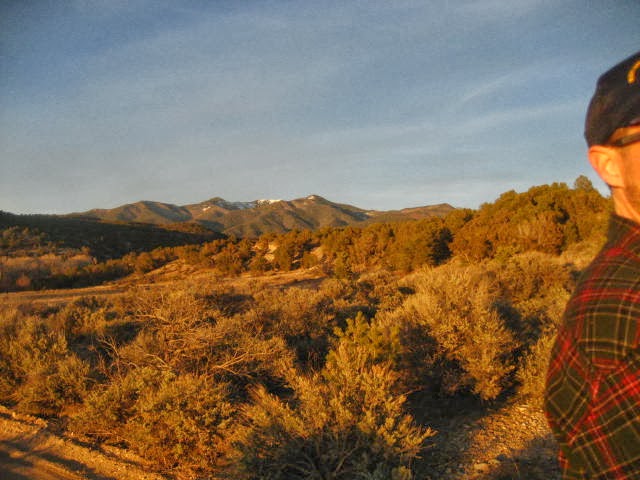 We'll be doing more of these.

We took a walk today. Hace muy ventoso en nuestro paseo pero... well, we needed a walk. Though it was windy, and bit cold, we are almost always hot about halfway into this walk. We jumped off the trail and headed up over rocks and through craggy trees. As we walked the clouds were spitting out snow. Just little bits in little spurts. Everything melted instantly.


We spend much of our time on these walks, looking at our feet. We find rocks that someone long ago was working into an arrowhead or cutting tool. So of course we are fascinated. Sometimes, as we walk along the rocky dirt, I get worried I'm just stepping on artifacts. Crunching them underfoot. 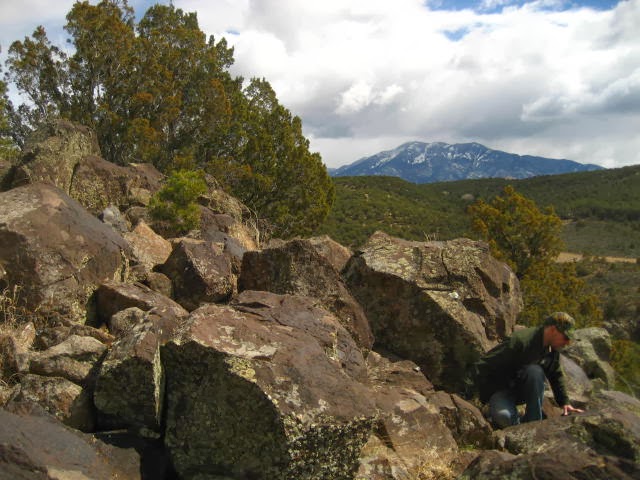 The Rocky Mountain Juniper tree, one type found up here, can live up to 2,000 years old. I have no idea yet how to tell one kind of juniper from another. But of course I wonder just how many of these scraggly trees have been watching over this valley for a millenia or two. 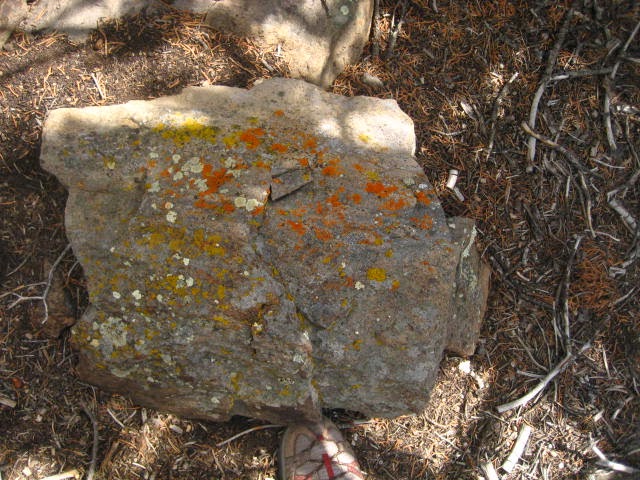 The walk was good for us. The rest of the day has been making some bread, working on a cover letter, and investigating truck stuff. We got bad news on the truck. We basically will need to invest in a new one, or invest in the old one. D., the owner of the truck is taking it all quite well. 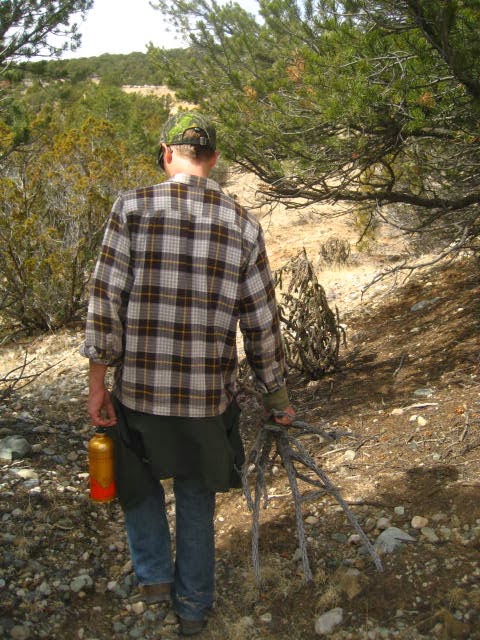 Today we returned with a large animal bone, a crazy looking cholla root-ball and a few more rocks. We nicely arrange everything on our front porch.

I'm fully into the find-a-job frustration. Am I doing enough, am I doing the right things, what do I do next, when will something come along, should I have turned down the part-time, temp job, why didn't I get a degree full of practical uses, like medical or accounting or something. These questions buzz around in my head. And then I take a deep breath. My hope and point in finding a new job was to work in town, meet people, be a part of something in the community. But I'm getting the sneaking suspicion that I'll need to re-focus soon, and find another stare-at-the-computer work-from-home job again. Oh well. I know there are many people out there in much more desperate need, so my complaints and frustrations can ring quite hollow. Fingers-crossed, deep breathing, it will happen.

And actually, right now with D. needing to borrow my car to get into town for work, it kinda works out well that I don't also need the car. There's me, finding the positive!
by e. at 4:28 PM 0 comments

some rain and reading 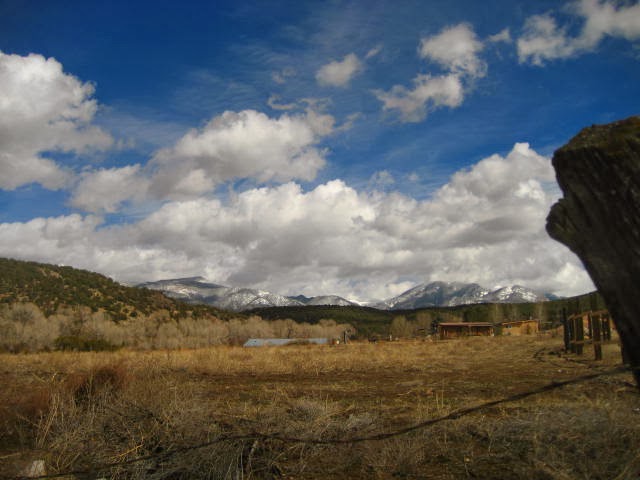 We had two days of rain & snow and humidity. It was a wonderful thing. Mother Nature has calmed our dust storms and smoky air. A feeling of Spring is now in the air. Hopefully more rain is to come. 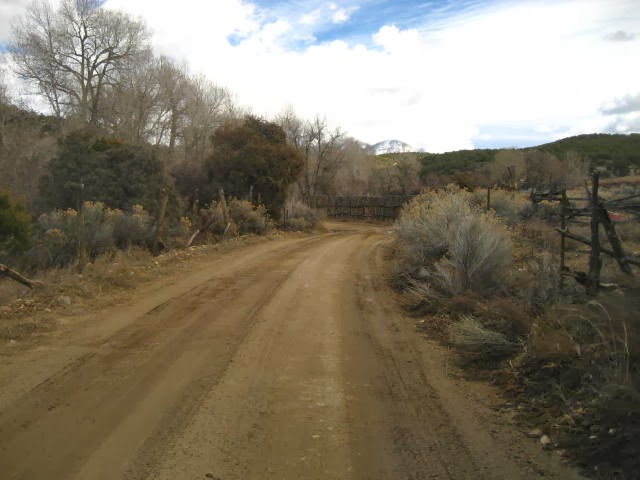 Taos is a place full of diverse cultures & lifestyles. And it is a small town, which has not grown much. The population having expanded only a couple-thousand people in 100 years. It is a town that was once a Pueblo, then became Spanish conquered land, then grew into a community of Hispanic farmers & ranchers, and then the Anglos showed up. First the Anglo "artists" who discovered the light, and were intrigued by a place that seemed outside of conventional America. D.H. Lawrence wrote, "...it was New Mexico that liberated me from the present era of civilization, the great era of material and mechanical development."

Following them were the Hippies, Outdoor-enthusiasts, Minimalists..., other people looking to escape conventional America, and found here that a person can still live mostly "off the land" and even "off the grid". 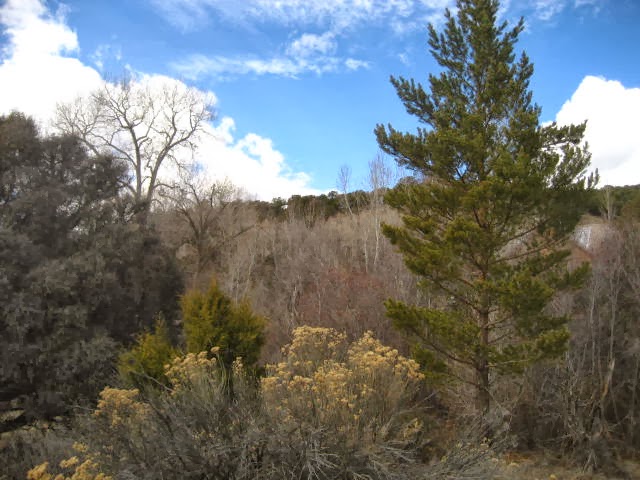 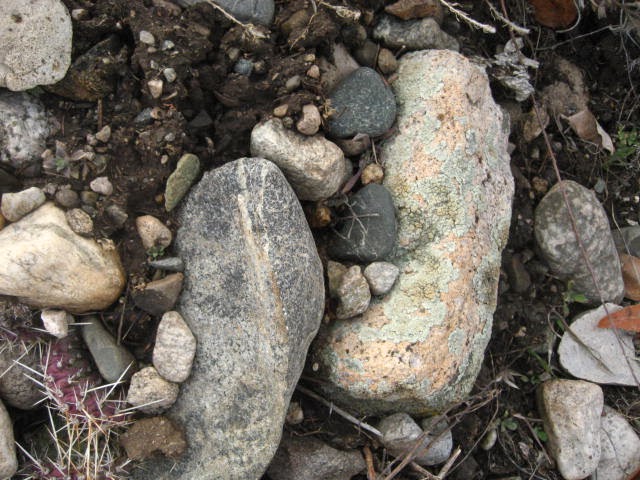 I haven't yet figured out how/where/who I am, here in New Mexico. And I'm the sort that needs to feel I know where I am.

"What is New Mexico then? How to sum it up? It is a vast, harsh, poverty-stricken, varied, and beautiful land, a breeder of artists and warriors...It is itself, an entity, at times infuriating, and at times, utterly delightful." --Writer, Oliver LaFarge

It is a challenging place, a place that feels not really on the map of the America I grew up in; it is a beautiful place, sometimes heartbreakingly so; a place with mountains that are ever-changing shapes and colors; it is full of diversity but lacks in community; it is a place that encourages creating art; it is a place where Anglos live, but will never truly be from; a place where speaking Spanish is normal, and English secondary; a place where everything comes with green chile sauce; a place full of space and yet full of walls; and it is a place that relies upon the land and people before relying upon technology or any government.

I started a project of reading what other people have said, written, believed about moving & living here. In a way to help me piece together my own understanding.

"It is the land that holds us here. It is the unrelenting land, this great, fierce, challenging, canyon-gutted, mesa-muscled land, which holds us & which gives us space enough to write a life on---and leaves it to us whether we have courage enough & faith to fill the page." --Writer & Professor, John DeWitt McKee
by e. at 8:40 AM 0 comments