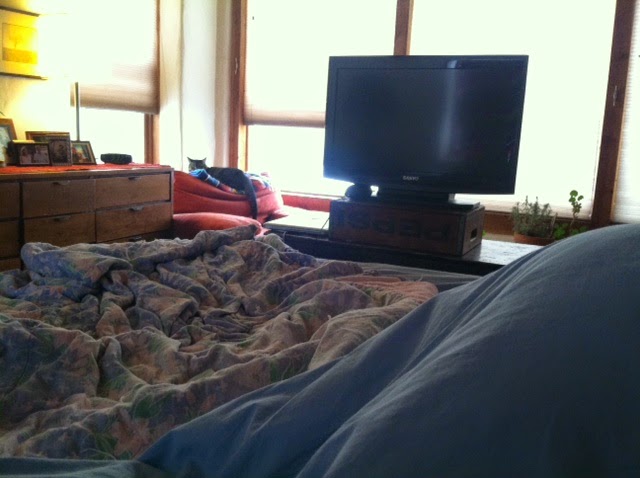 a week ago now I was coming out of surgery. my hysterectomy, which had been scheduled for months, and known to be inevitable for years, finally had to happen.

my post-op recovery took awhile longer than expected, worrying D. who was waiting. but when I woke, in the dark blur with a nurse named Jason talking to me, all I felt was pain deep inside. the spinal I'd received was surely working, but just not that well. so it took awhile to get enough morphine in me to move me into a room.

eventually in a private room, which other than having to listen to a woman in labor/giving birth in the room next to me, was quiet. ironic that women who are losing their ability to birth recover in the same ward in which women are giving birth.

i've been home now for almost six days. with at least six pillows propping me up in various ways. with a cat allowed to sleep on the bed next to me. and with a constant supply of hot tea and loving attention.

today when I first woke up I was thinking about how I can't go back and undo it. it is done. and overall, I'm very glad. this morning I was just tired of feeling the pain.

for me, getting through surgery heavily relied on one thing. my loving partner, who didn't want to leave my side. he was there to listen to the nurses, ask questions, sleep two nights on an uncomfortable roll-out chair, fill my ice cup and each time i needed, he helped me get out of bed, walk me to the bathroom, helped me sit on the toilet and then he pulled me back up.

it does feel like something is gone from my insides. it is almost surreal how much I can tell. but I hope I won't miss it, or what it represented, too much. as I have so much around me to fill me up. so much to keep pulling me up.