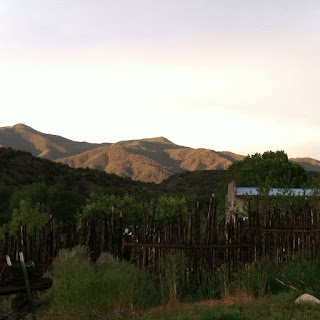 sun setting reflection on our mountains.
by e. at 8:43 PM 2 comments

little church in las trampas and a rainbow after a storm 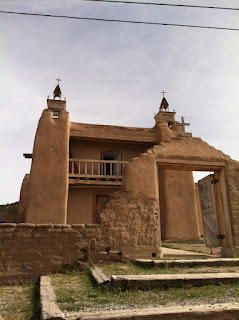 One was to drive down to Santa Fe, and visit the Georgia O'Keeffe museum. So we had a Saturday free, and it was too cold outside to be outside, so we took the High Road to Santa Fe. One the way we stopped to see the church at Las Trampas. San Jose de la Gracia was being finished by the Spanish just as the Declaration of Independence was being signed by the Americans. No pictures are allowed on the inside, which I think preserves the magic of it. The inside was painted by the early parishioners...what we consider now, folk art. We were only able to get inside because the lady living across the street was nice enough to get the key from someone else, and let us in. I felt very thankful, and like a little bit of grace had been bestowed upon us. 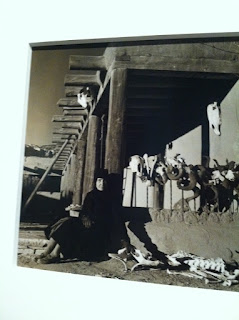 Having long admired Georgia, since my younger days due to my mother's own love, it was time I visited the museum. The paintings were of course gorgeous, but the photo exhibit was beautiful. When I think about why I live here now, I remember how Georgia loved it so. Also, she looked awesome in a black, flat-brimmed, spanish-style hat, and so now I think I need to find myself one. 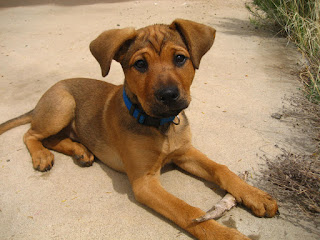 Sometimes Spring brings new things. For us, it is Sasha. Sweet little Sasha'ita came to us at about 8 weeks old, but we had been visiting her since she was born. D. has finally completed his family picture with a dog. She joins us on our walks. She calmly watches us about the house. And she loves napping. And Libby the cat has tolerated quite well. 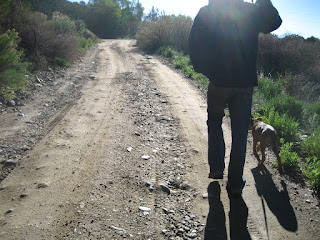 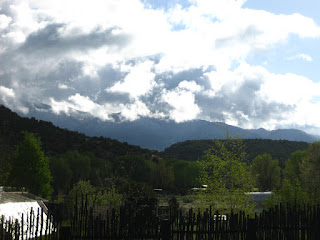 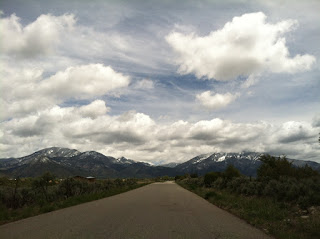 New Mexico stays too cold too long for this girl of Kansas. About mid-May I was having a hard time with the still freezing nights and occasionally flurry of snow. But despite my irritation, I could still see the wonder of the scenery around me. 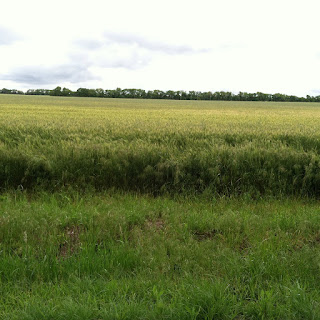 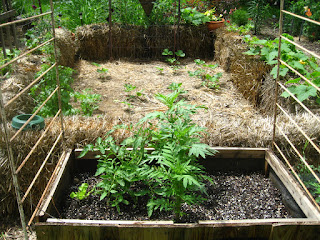 We went to Kansas I got to see the iris & peonies blooming, the wheat fields tall and still green, and we got to see some of the more important people in our life.
We returned to Kansas with warmer days in New Mexico. and now the snow piles on top of the peaks seem smaller, and our friends are no longer talking about skiing. 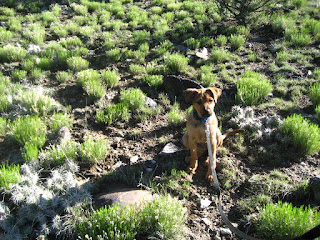 Our garden here too is growing. All the things are planted. slowly the weeds are also pulled. cilantro, morning glories and cosmos easily re-seed themselves, and could be the entire garden if I let them. What has given me little joyful moments are the marigolds also re-seeding themselves.

Last week a woman I know was killed. Her brother having been a friend of mine since teenage years. Her death has shocked her community, but her community has responded by finding ways to celebrate her. The sadness has stayed with me. and the distance which prevents me from seeing the people she & I had in common, seems to make the sadness deeper. 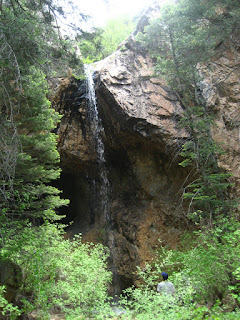 And when this past weekend we took a walk to see a waterfall, and then later after a sweeping storm saw a rainbow, I thought of her, and of my friends in Kansas, and of the temporary nature of all of us. The waterfall and the rainbow are both things we know we will see, but only briefly, and only after a storm or when the snow melts. they are beautiful, and they will exist, but they are not  constant.

Saturday we drove up to Lama to visit a friend who has built himself an amazing and tiny cabin, perched up on the mountains, with a view of what looks like the entire world of peaks and valleys. We ate sitting outside & listened to the wind pick up, watching the sun set over the mountains. Eventually we stood by a fire. escaping only once to shelter during a brief downpour, one that was followed by amazing rainbows. 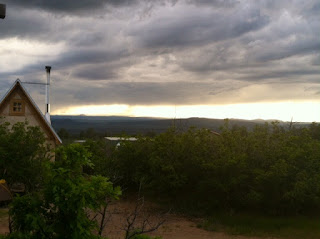 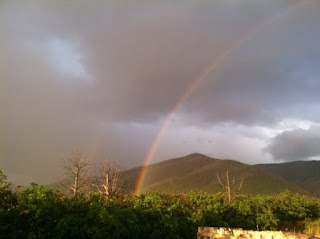