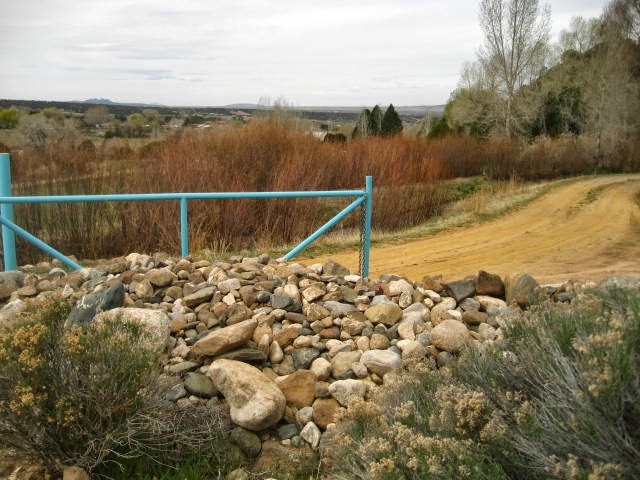 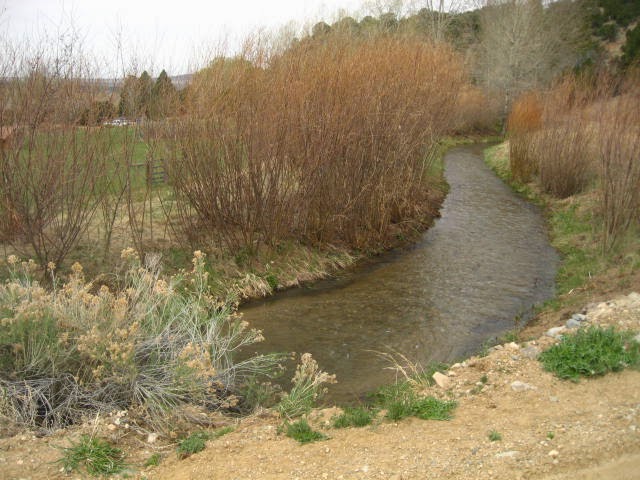 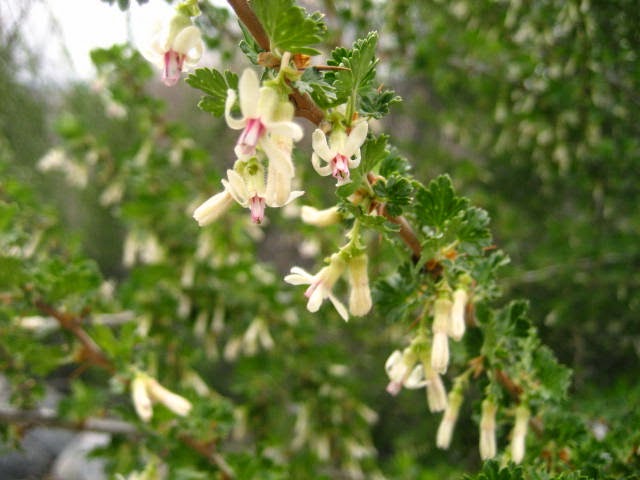 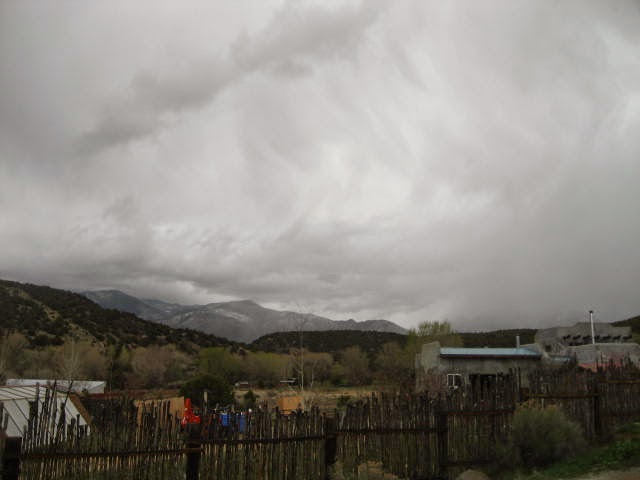 I found a job, and just had my first week. It isn't a job I was hoping for, but it is a job. And it was the first full-time job I was offered in these eight months. So it is my job now. It is for a small company, with very nice people, and it pays very little. But I have something to do. And will manage to pay the bills.

Took two walks yesterday, one on my own in the morning. I just knew I needed some exercise & mind-clearing. I found a bush in bloom, I'm not sure what it is. And another walk later, with D., as he also felt the need for some air. The wind was strong, and it began to get colder as we neared towards home. Snow fell last night.

A slow Sunday afternoon. I baked bread and muffins. Am listening to the wind & the snow blow through the trees and over the chimney. And it might be time for a little nap.

mixing all the dirt 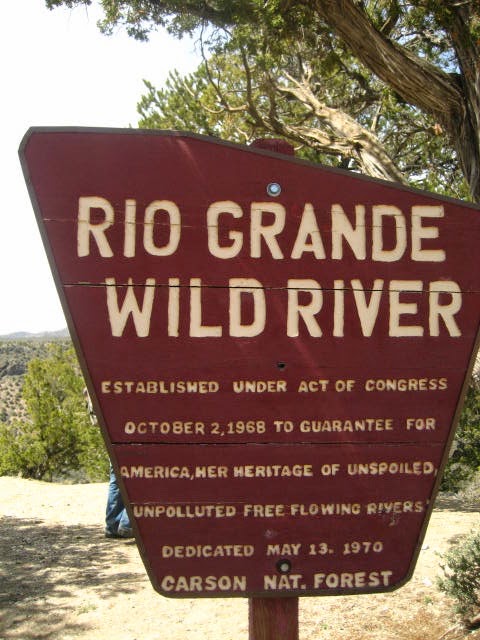 Another walk out in the Wild Rivers area. It seems so near us, which is why I think we keep going back. This time we took the Cebolla Mesa trail down to the Rio Grande. 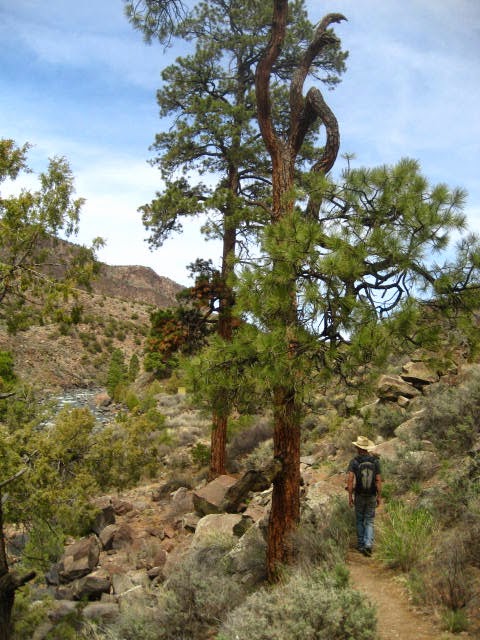 A lot of lovely Ponderosas along this trail. And it was a nice warm walk. Hats were much needed. And our long-sleeve shirts quickly ended up in D's backpack. 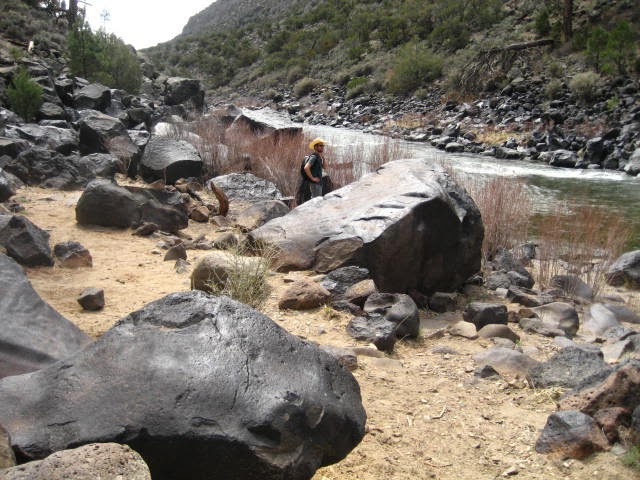 The rocks/boulders at the river bank have all turned black & sculpted from the years of water moving over them (thousands, hundreds, a million?) Big, solid remnants of time. 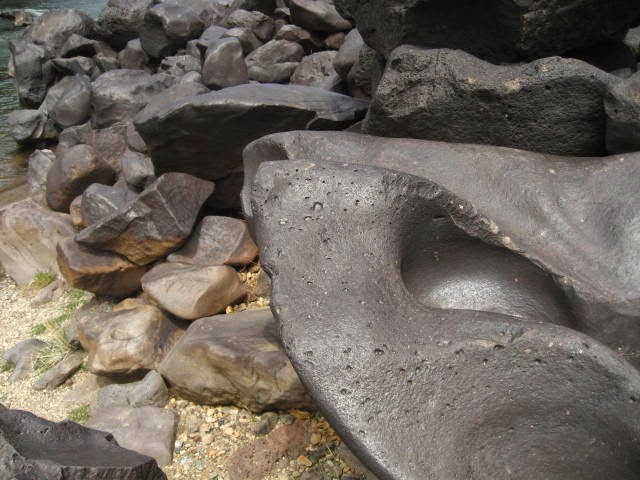 With such smooth curves. 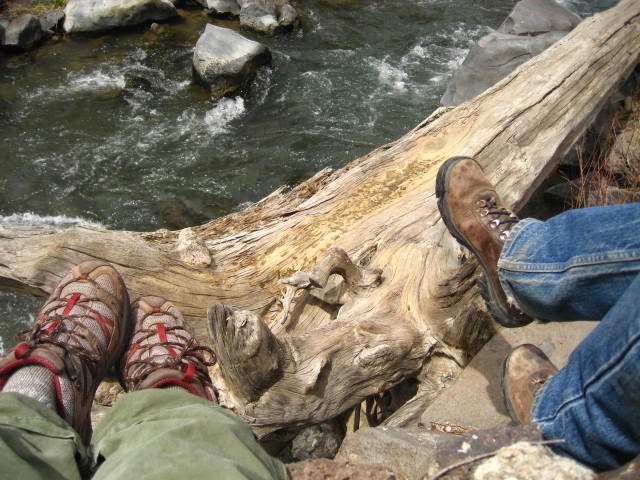 We sat on one end of what was once a bridge. We divided up the granola bars (next time we are packing a lunch) and snacked in the river breeze. 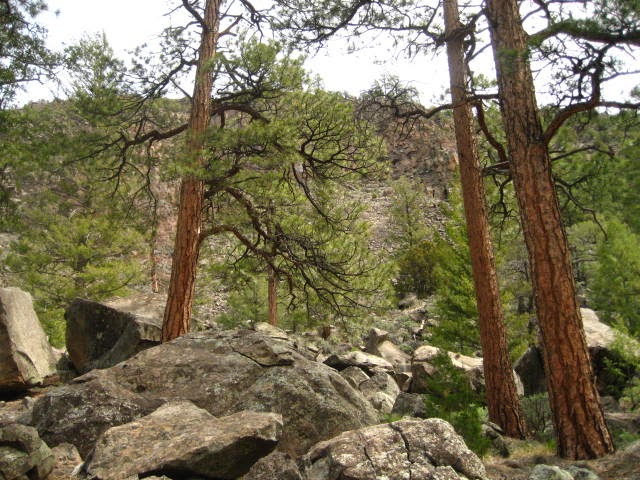 It took us about three hours, down & up. And we talked about what awesome shape we'd be in if we did this hike each week (the coming up involves a few breathers).

This morning we bought a few things at a rummage sale and then an estate sale too. And then spent a couple hours just digging dirt, making little ditches, adding better dirt to the dirt, and then mixing all the dirt. A garden expansion is in the works (just a few little beds for onions, herbs and more flowers). We know so much more about this land than we did when moving in a year ago (about). So knowing what we can grow, and how much, we've decided to grow a little more. The greenhouse is alive right now, with seedlings from the all of us living here on this farm. 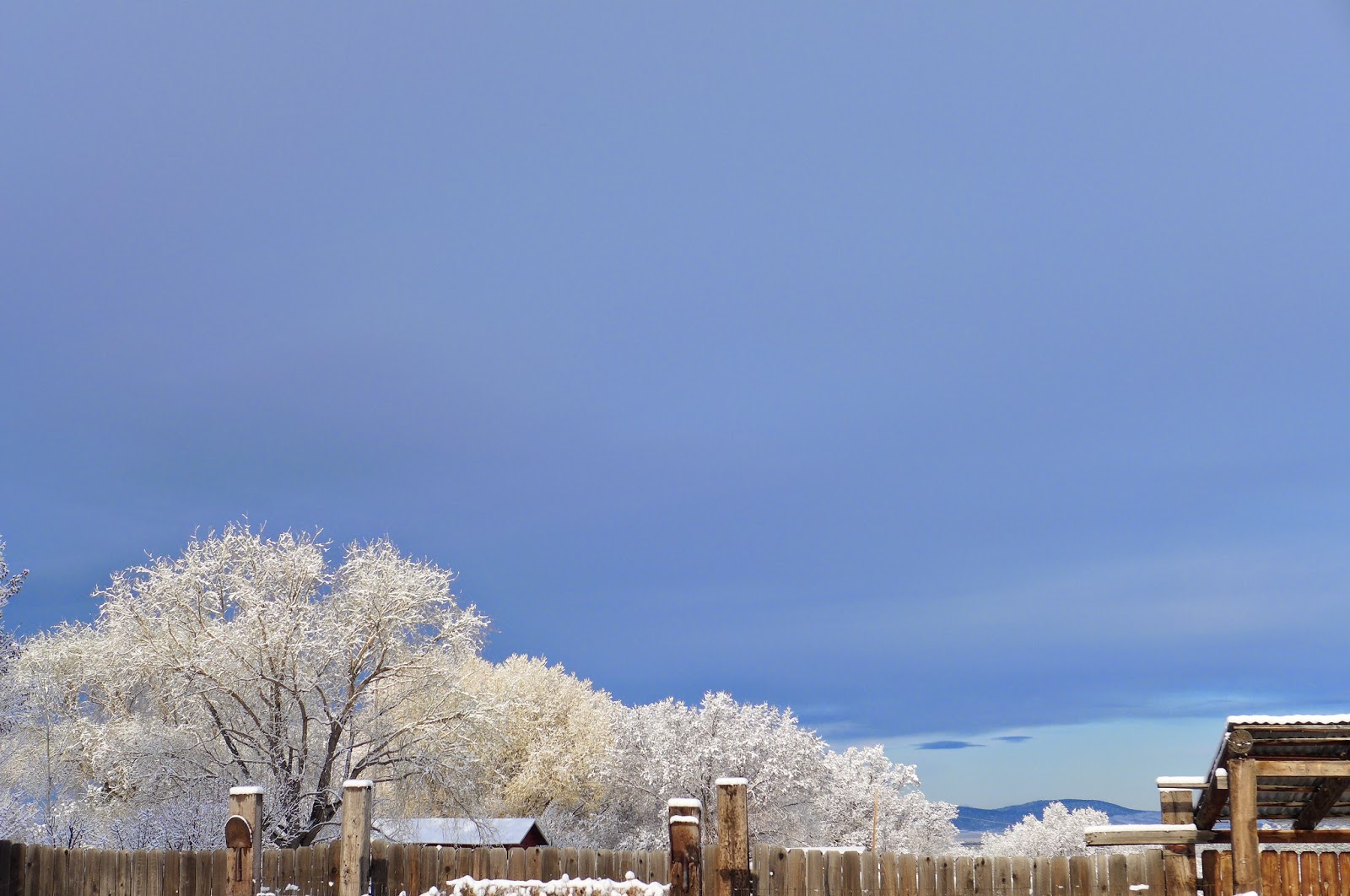 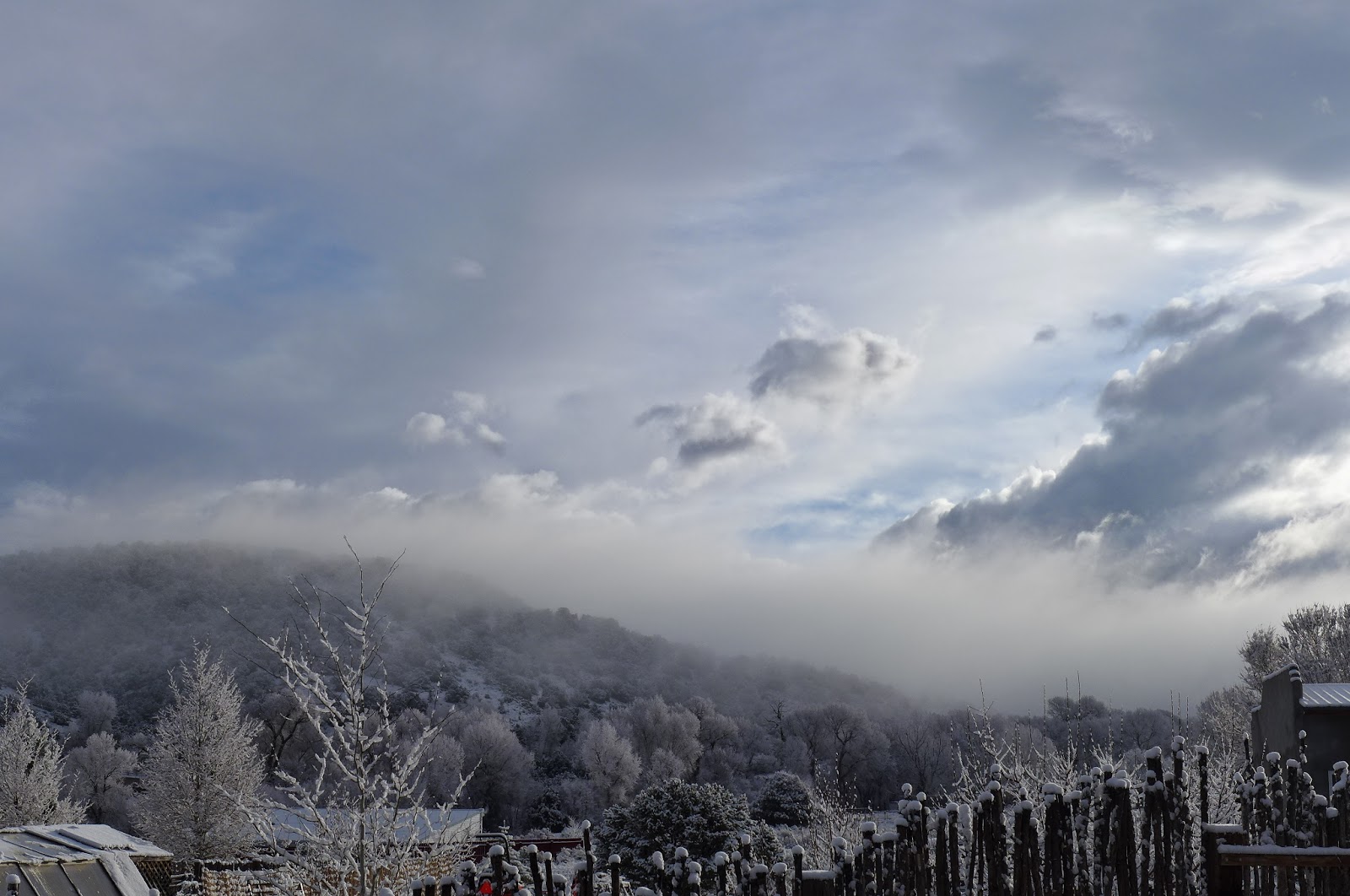 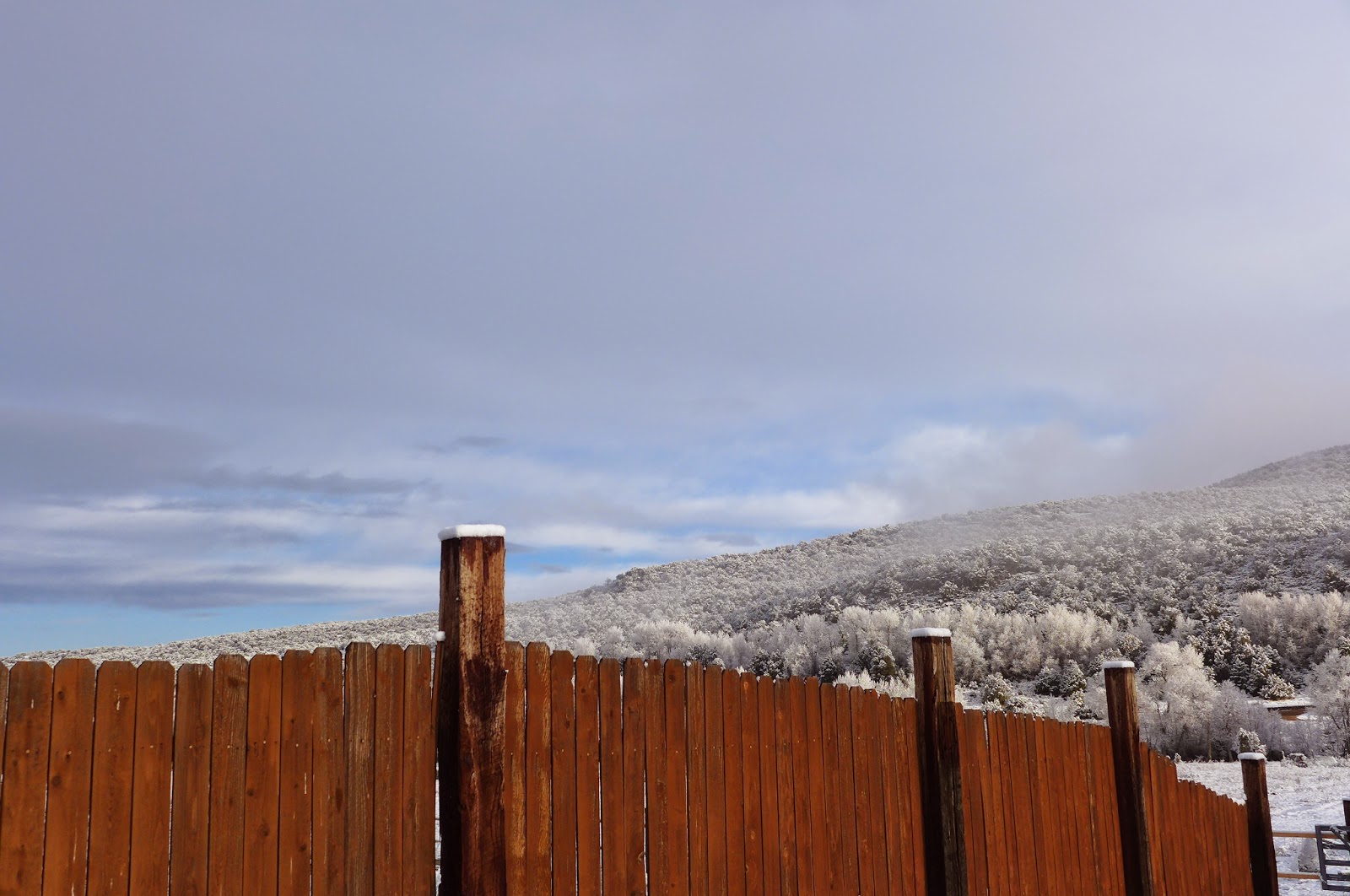 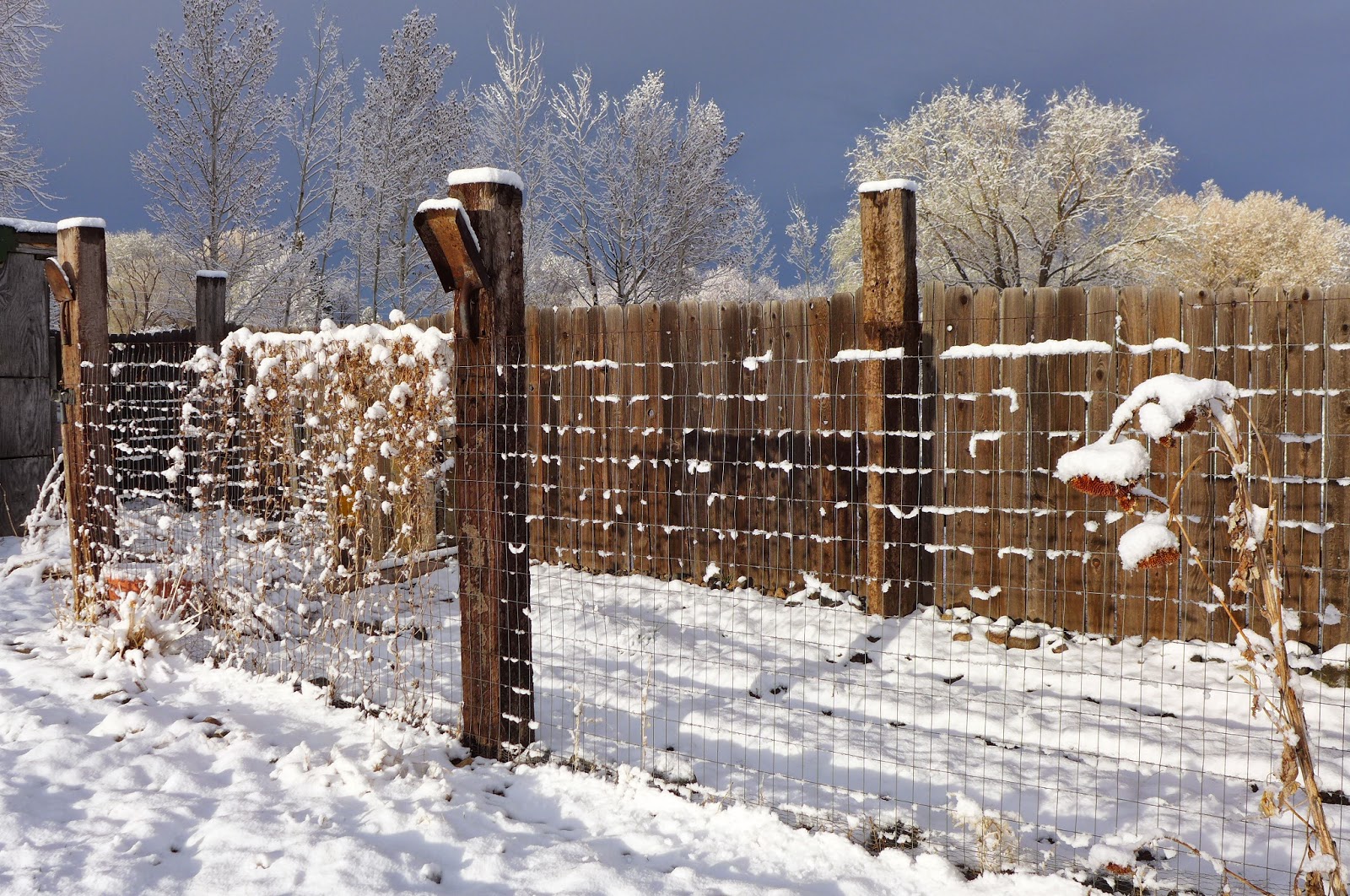 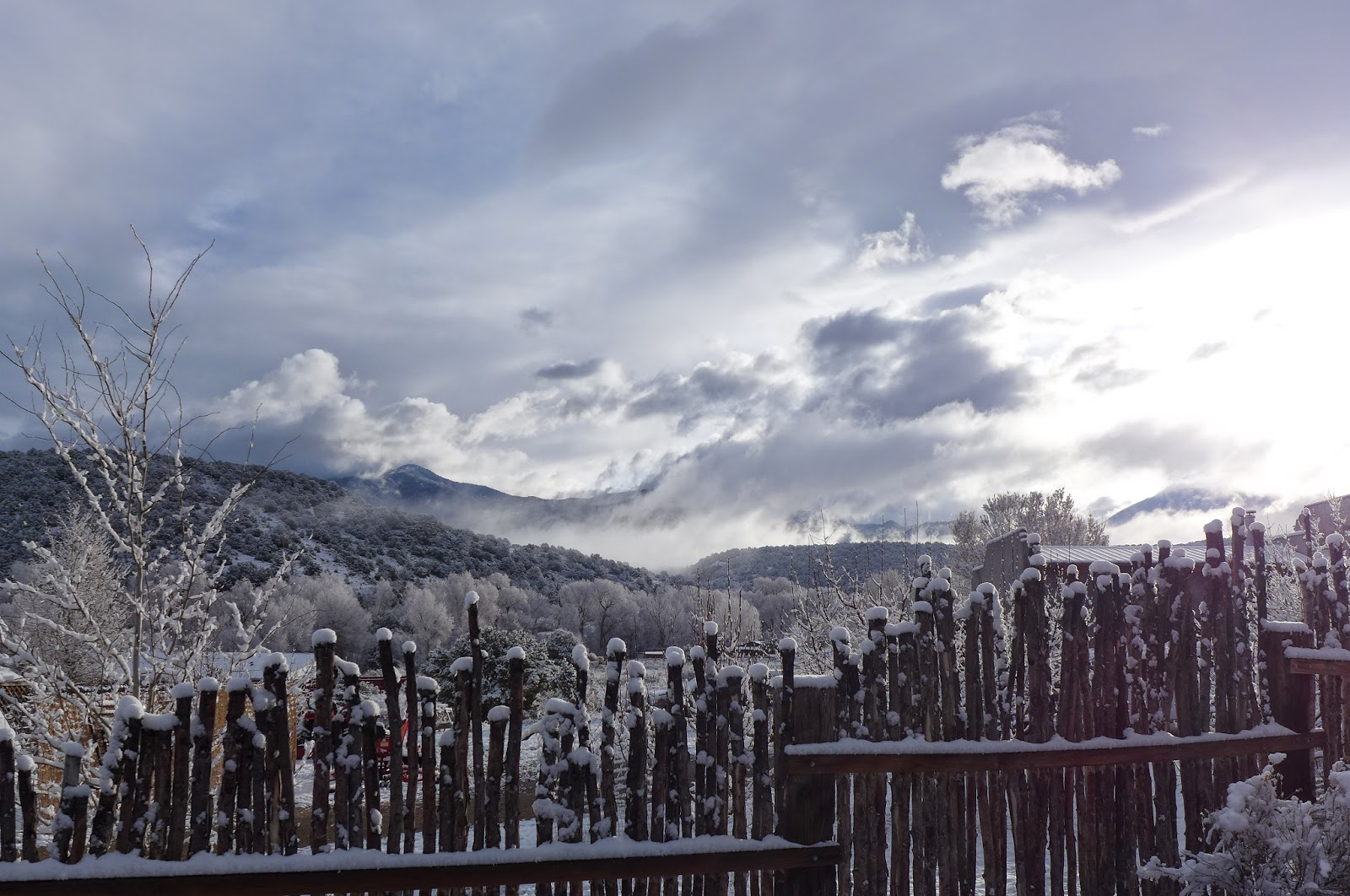 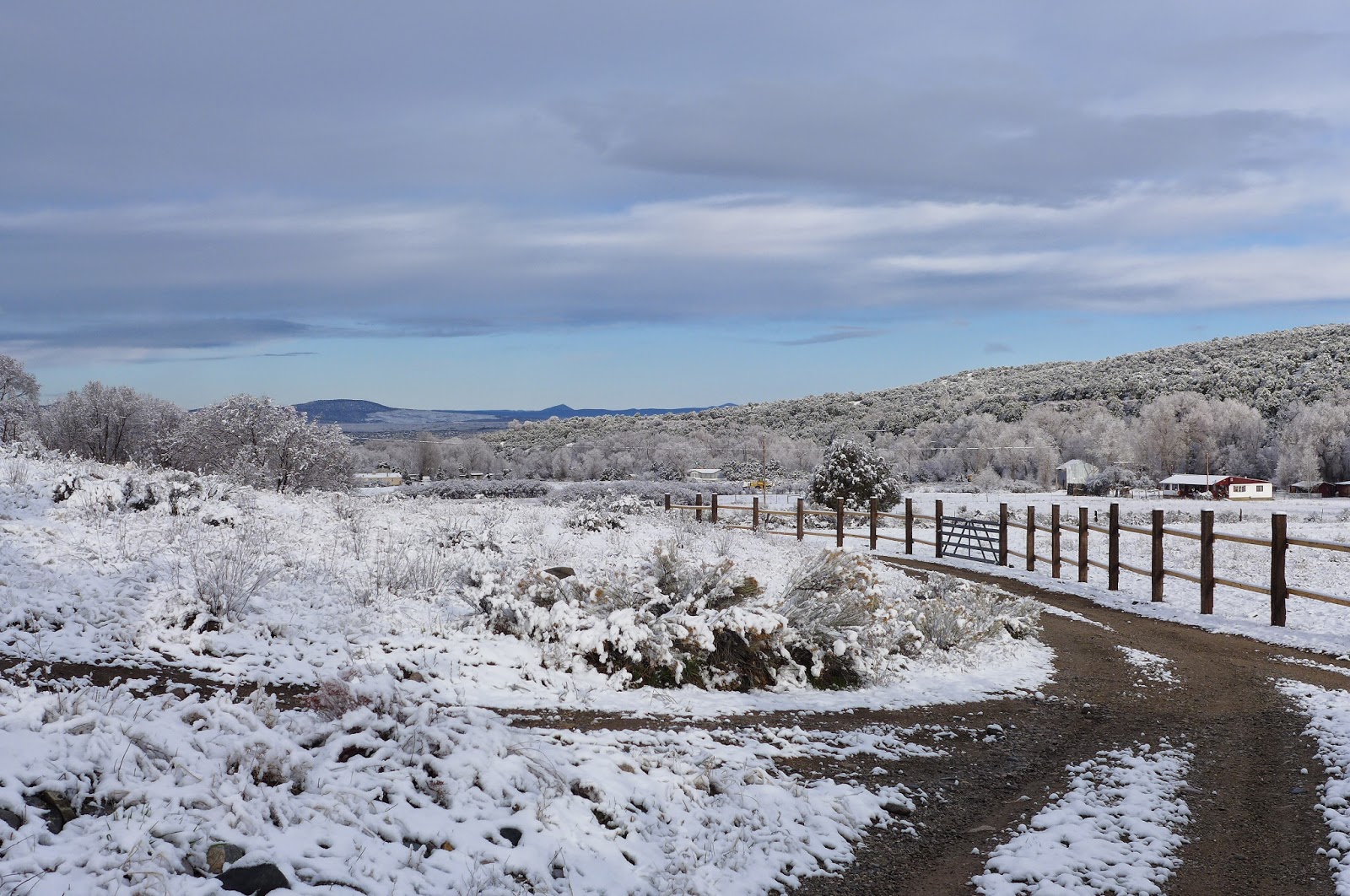 Yesterday's snowy morning gave for lovely views, as the sun rose & clouds lifted out of the valley. By afternoon the snow had mostly melted into the land. I spent some time digging up dirt in the garden bed. I was pulling out weeds and planning new beds for more room to grow. Even in the cold, it felt like the right place to be. And I could hear neighbors outside doing the same.
By late afternoon, the sky clouded up and snow fell on me as I shoveled. So I headed inside to start pasta sauce to simmer on the stove awhile. (I'm down to just four jars of sauce from last summer's harvest!)

All fog this morning. But slowly the sun is rising and it lifts.

work day on the ditch

We live next to the Acequia Llano del Madre, it feeds from the Rio Hondo. This is our "ditch" which we use to water our garden. It looks like a narrow creek with a rocky bed and willows growing along edges. But the acequia is actually a canal, dug out of this landscape, some time in the early 19th century after the Arroyo Hondo land was granted to Spanish families for settlement.

There are hundreds of these ditches in NM. Often acequia building came second only to building a community's church. When the Spanish first began to colonize NM, over 400 years ago, they recognized the irrigation practices of the native peoples, as it resembled water irrigation back home in medieval Spain. They adapted the system into their own rules, and the acequias function pretty much the same today.


Each Spring, before the ditches are officially turned "on" (headgates are opened) all parciantes (land owners who use the ditch) are required to help in the community clean up. Everyone who uses the water, has to share in the work. And I think its one reason why people here carry such a value to their water...something not seen places where getting water means just turning on the faucet. La Agua es La Vida, so they say.


Though our landlord is the official parciante, we volunteered to help her work. We woke early, dressed for the cold in our wool shirts, boots and heavy work pants, threw some granola bars & water in the backpack, and carrying a shovel and hedge clippers, walked down the road to the official meeting place, the church. We stood there among our Llano del Madre neighbors of all ages. Each landowner's name was called out, names here for muy generations such as Martinez, Padilla, Chacon, Vigil, Medina, with a few scattered Anglo names (which means you've been here only a generation or two) such as Frank or Miller.

We got assigned to a crew, started at el Medio, and worked East for hours.  Digging roots, cutting willows and removing debris. All down the row, speaking Spanish or English, in polite conversation and neighborly jokes.

An older man noticed that I was stretching & rubbing my hand (it hurt), and he told me about the arthritis in his hands. And then he said, "eh, but I grew up with a shovel in my hand." He had nine brothers and they were his father's cheap labor. An older little lady, (who'd been sure to put on her rouge & lipstick for the work day) took D's shovel from him twice just to show him how to do his task a little better. She told us she grew seven acres of orchards & alfalfa. And lamented how all the city people have no idea where their food comes from, or how hard it is to grow.

I understood 1/64 of the Spanish I heard today. Or maybe less than that. New words regarding acequias learned: sangrias, presas, desague y compuertas.


We worked half the day, and left feeling tired and a little sore. But feeling accomplished too. We took part in something that has meaning for this place. And when the water starts to flow, we'll feel a little more like we actually deserve to use it. 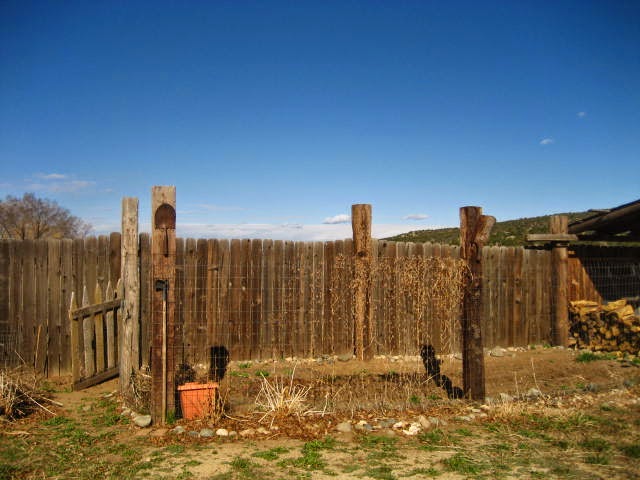 D. did a lot of searching, and then one day he drove the old truck up to Colorado, and drove home in a newer deal. So, we have a truck again--and a good-looking, reliable truck with all his wants, so that has been a happy thing.

I've been going out to the garden plot, and basically just hanging out. I pull out weeds from time to time, but that's all I can do. I check on the little green bits of the sage, thyme & oregano popping up, and they are always just fine. So are the hollyhocks. The warming sun and the green grass popping up all over the place has given me some garden fever (and is giving the cat Spring Fever...in which she just spends her days plotting how to sneakily run outside.) 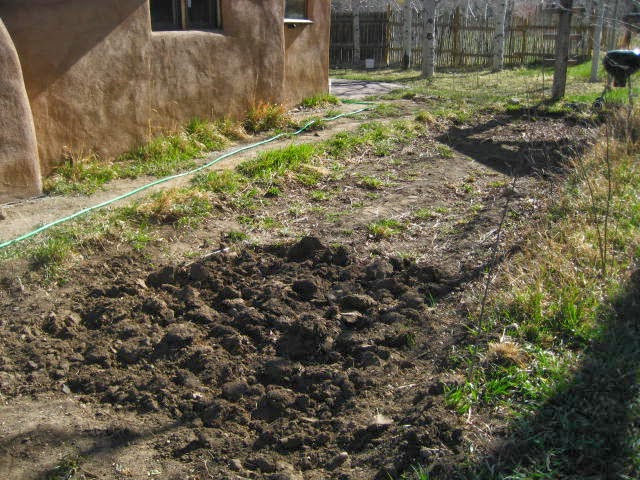 We dug up a little plot just by the house. This is where I'll throw flower seeds. The idea is that I'll have flowers to look at outside my windows. This will be a very happy thing.

We fashioned (well, not We really, it was D. who did all the fashioning) up a cold frame. I've planted some lettuce & spinach. This an experiment, but if it works, I'll have salad greens just outside my windows too.

The best time of my week so far was spent down in the greenhouse. The landlord showed me where I could put my starts in amongst all of hers and our other neighbor. Inside the orange tree & lemon tree are blooming beautiful white & pink flowers...making a lovely scent, fully perfuming the air. Bees were happily at work, buzzing in the trees, occasionally zooming by me to see what I was up to, but always returned to their pollen opportunity. I planted dozens of starts...tomatoes, peppers, basil, cilantro, dill, marigolds, zinnias and statice. I'm sure I'll end up starting even more in a week or two. Getting seeds in dirt is always a soul satisfying experience.